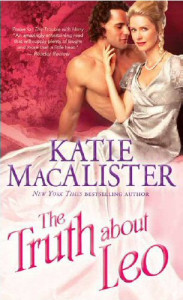 The fourth book in the Noble historical series is out on Tuesday, August 5th, and in celebration of my return to the world of historicals (and a dishy hero, because one cannot celebrate them enough), I've decided to fire up a contest for my favorite readers.

Yes, that means you. Didn't know you were my favorite? Well, you are, and because of that, I want to see you with Leo! If not the man himself, then the book will do. :)

THE CONTEST
WHAT: Send a picture of yourself with a copy of The Truth About Leo to contests@katiemacalister.com - If you are shy about sending a pic of you holding the book (or e-reader showing the cover of the book), you can use your dog/cat/child/cardboard cut-out of Legolas/just your hand/whatever else rings your chimes to hold the book. But it does have to be a picture, and it does have to be sent with your entry, because I'm crazed from moving and pictures amuse me to no end. Yes, this is a selfish contest.

HOW: Attach your picture via an e-mail, or plop it online somewhere and send me a link. Also in the e-mail include your name and mailing address.

BONUS POINTS? You betcha! I want word of Leo to get out, and what better way than to have you post online the spiffy picture you take of yourself with the book. If you post the picture on Facebook/Twitter/Google+/Pinterest/Name Your Social Media, and include a link to the post in a separate e-mail, it'll give you another shot at winning a prize. Hoobah!

PRIZES: There will be one Grand Prize winner of a $50 Amazon gift card, and nine winners who will receive a signed book, or audiobook, or Katie-made spiral notebook, or (also Katie-made) beaded book thong, or miscellaneous swag assortment, as picked by Assistant Sister.

DEADLINE: You must send your picture of Leo and you in by midnight (Pacific time) Friday, August 22nd. All winners will be randomly drawn from the pool of entries. And yes, the contest is open to international favorite readers, although I'm not sure if Amazon will honor the gift card in other countries.

Happy Friday, my cherubs of charity...challenge...ch...ch... happy Friday my dumplings of deliciousness!

I bring you news. First of all, Jessie over HEA blog did a Throwback Thursday, and invited me to participate. You can read about all the fun memories of books past at http://www.usatoday.com/story/happyeverafter/2014/04/03/throwback-thursday-80s-romance-macalister-lane-garcia-staab-michaels/7268999/

Also, the re-read of Fire Me Up and Blow Me Down (I can't help but giggle at the two titles together) will soon be taking place on the Katie Mac Official Discussion Group, as well as the first ever Blow Me Down Puzzle Pirates Readers Romp. Deets can be had over on the group (link for those of you who haven't seen it: https://www.facebook.com/groups/359678384170905/)

And finally, those of you who participated in the last contest will be happy to know that Assistant Sister has sent out the final batch of Assorted Katie Swag to winners. The next contest will be coming up next week, so stay tuned to both this page and the Discussion Group (we'll run separate contests for both pages).

A note for those of you who love all things Drake and Aisling...over on the Official Katie Mac Discussion Group on Facebook, we're about to dive into a readapalooza with You Slay Me as the first group read/discussion book. Reading commences now, and discussion will start on the 24th.

All righty, my darlings, I promised you a post with dragon news, and here it is: if all goes according to plan (i.e. if I don’t go insane in the process of writing five books this year), then there will be not one, not two, but three dragon books released next year.

Yes, along with the two new contemporary books. I know! I’m totally crazy, right? But luckily, I have publishers who like this form of craziness, and, in fact, encourage it. No word on exact dates for the dragon books, but I’m expecting one to be out sometime during the summer months, and then the last two toward the end of the year.

The first contemporary will be out in January, with the second in (I think) May, or thereabouts.

And since I know some of you are wondering about vamp books…no, I haven’t forgotten them. Yes, I will write more. But not this year…with five books to write in twelve months—and god help me, I’m thinking of doing some new YAs as well—I’ve got as much as I can handle. I’ll start thinking about Dark Ones and steampunk and other such things later this year.

The discussion about just what dragon sept is going to be featured in the books will be conducted over on the Official Katie Mac Discussion group (https://www.facebook.com/groups/359678384170905/). Yeah, yeah, subtle, I know.

Over on the Official Katie Mac Discussion area (https://www.facebook.com/groups/359678384170905/)  Reader Nadia posted a comment and question about covers: I love ALL of Katie's books from the historicals, to the Dark Ones, to the delicious dragons. The one problem I have had is that for example in the dragons series, Aisling's covers are different than the silver dragons and the light dragon covers are waaaay different [I'm a wee bit OCD]. So when I buy the books in paperback I twitch, does anyone else have this problem with their series covers not matching?

Covers are both a delight and a bain to authors. Usually, we have input on the covers, but we don’t always have the final say in either the design or the subject. My publishers always ask me for suggestions of what I’d like to see, and they run covers by me for approval,  but  I very seldom put my foot down and say no, that cover will simply not do (actually, I’ve only done that once).

That said, in the situation that Reader Nadia was describing, I did have influence on the covers…but only the Baltic series. The covers for the Aisling books came out at a time when cartoon (or illustrated) covers were hot, hot, hot. The art dudes at Penguin came up with a spiffy design for You Slay Me, and they ran with it for the subsequent three Aisling books. You’ll notice that the artwork for all four of those books is similar, with sharp pointy edges, and bold colors.

By the time the silver dragon books came along, the precedence had been set—they did cartoon covers for the first sept, so they’d do the same for the silver dragons. They changed up the style, however, using softer lines, and different color schemes so the books would stand out.
Then came the light dragons. By the time I was writing those books, I felt a change was needed in the dragon covers. I wanted the covers to reflect the fact that Baltic was Mr. Sexy Pants, and asked my editor if we could switch from cartoon to a photo cover, preferably with a guy bearing a dragon tattoo. Boy howdy, did they come through. 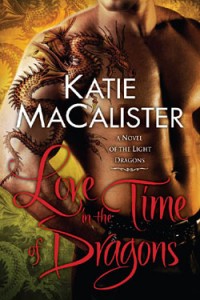 The cover for Love in the Time of Dragons quickly became my most lickable…er…favorite, and they continued with the bare-chested/backed guy theme for the other two Baltic books (the back view on the Sparks Fly cover was my idea, as well. I do love a sexy, sexy back).

While it might drive readers like Nadia nuts that the covers don’t all match, the reality is that art departments are going to do what they think will sell best. If covers of half-naked men bearing dragon tats weren’t selling, they’d never have let me have one on a cover, let alone three. So I’m afraid the best I can do for those folks is explain why the covers change, and hope they’ll look past them to the stories inside.

Deets about the upcoming reader chat can be found here. Be there or be square! 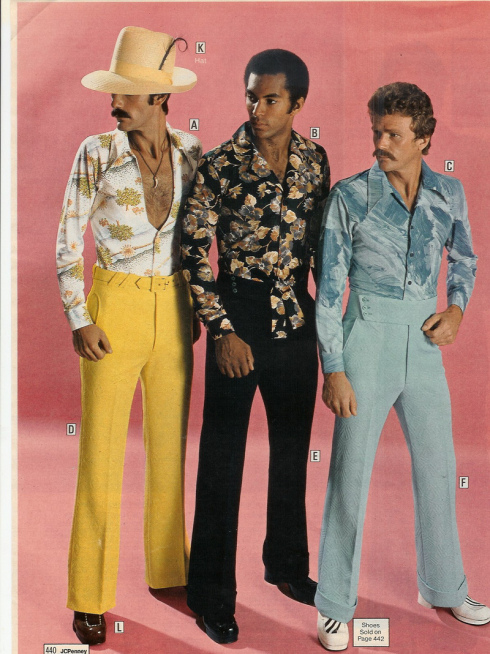 Friend Shawna, for some bizarre reason, started hunting up old 1970s catalog ads, and before I knew what was happening, I was elbow deep on a blog with a ton of vintage ads, just howling with laughter. 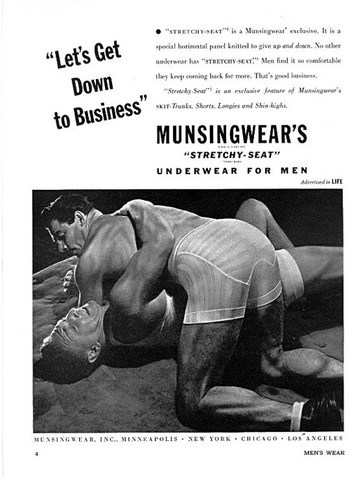 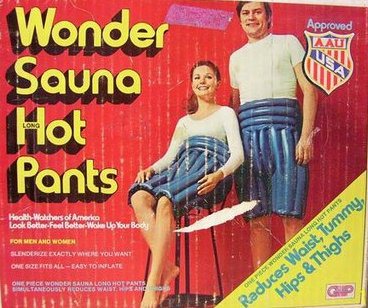 If you want to see these and many, many more  (with the hilarious commentary on the ads), trot yourself over to
http://beccalou.wordpress.com/tag/vintage-ads/ You'll be glad you did. 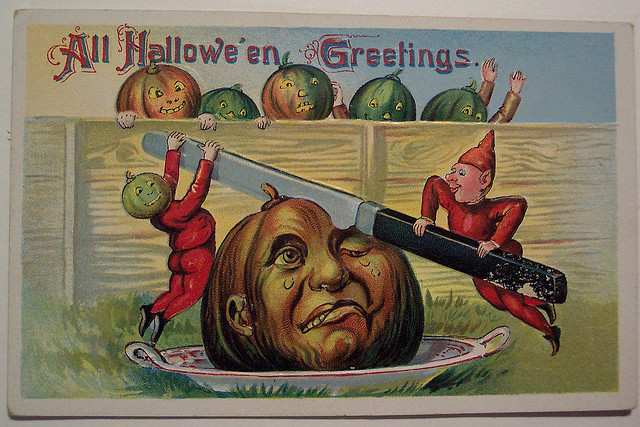 I bring you the most ghoulish vintage Halloween card I could find in hopes you have a fun-filled spooky evening.

[The postcard above comes from a wonderful collection of vintage cards. Check it out here.]

Finished knitting the Jayne Cobb hat for my friend Brian. Hope he doesn't mind that I had the dogs model it before I send it out to him... 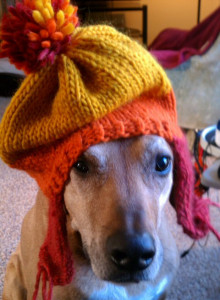 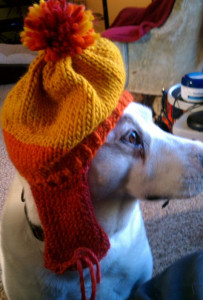 "Katie," I hear some of you saying. "What is it you're doing now that you should be writing another book, hmm?"

And the answer to that would be...knitting a friend a Jayne Cobb hat. Yessir, that's totally a productive and valuable use of my time. *nods vigorously* 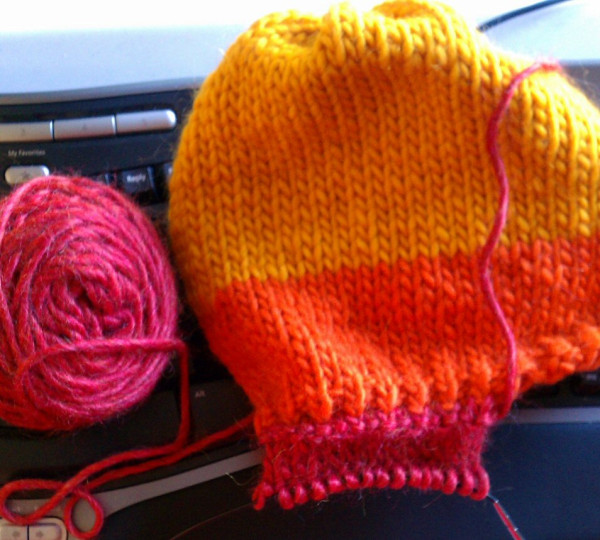